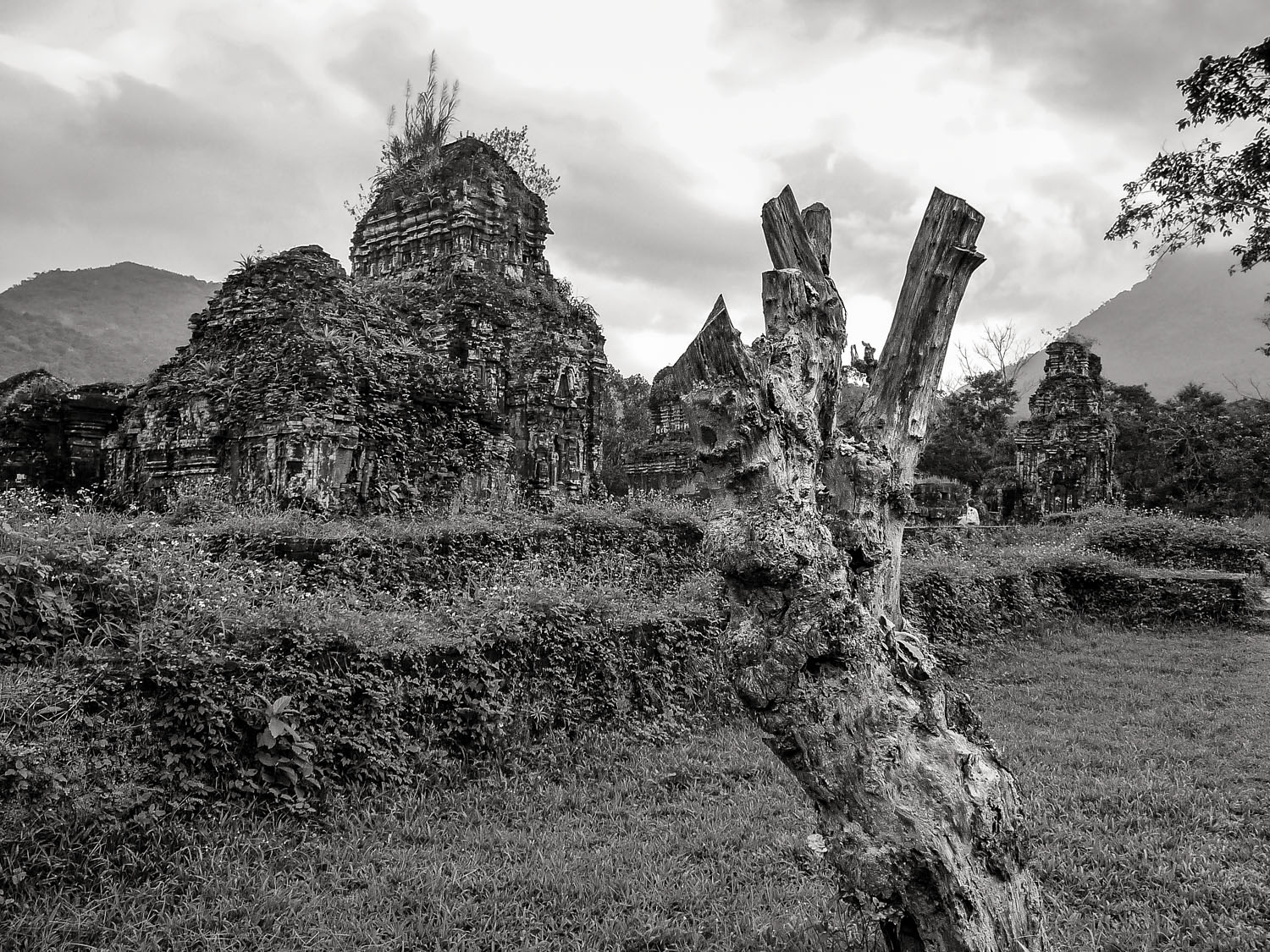 Established in the 4th century by King Bhadravaman, the sanctuary of My Son was continually occupied up until the 13th century. Containing the remains of 68 structures and temples My Son was the home of the Cham people, a long-standing rival of the Northern Vietnamese, as well as the Kingdom of Angkor in Cambodia.

Now a UNESCO World Heritage Site, the ruins of My Son are an exceptional example of a cultural interchange. The site is a significant Cham historical location and an important phenomenon in the political and cultural history of south-east Asia. My Son vividly illustrates the introduction of the Hindu architecture of the Indian subcontinent into the region.

Situated within an elevated geological basin and surrounded by high peaks, the site was relatively easy to defend. The source of the Thu Bon River flows past the monuments, continuing through the Chams historical heartland. Eventually draining into the South China Sea at its mouth near the ancient port city of Hoi An.

The Architects of My Son

It is likely that the original Chams of Vietnam, who are ethnically different from the people of northern Vietnam, were immigrants/colonists from the Indonesian islands. They were particularly skilled in trade and shipping.

The roots of the Champa Kingdom can be traced back to the people of the Tuong Lam area. After rising against their Chinese overlords, the Chams created an independent state. This narrow strip of land along the central coast of central Vietnam is known from sporadic Chinese records and referred to successively as Lam Ap, Hoan Vuong, and then Chiem Thanh.

It was one of numerous 'Indic' cultures (also referred to as the 'Indianized Kingdoms') that flourished in south-east Asia between the 6th and 15th centuries. Practising a form of ancient Hinduism centred around the Hindu God, Shiva and the Mother Goddess, in their prime, the Chams not only occupied much of Vietnam but also portions of neighbouring Cambodia and Laos.

Their chief cities along the coast of Vietnam served as key ports in the important trade routes. Such routes linked numerous Indonesian islands, China, India, Persia, Arabia and Europe. Between the 7th and 11th centuries, the Chams controlled the harbour town of Hoi Ann. At that time this was an essential link on the ancient strategic spice, ceramic and sandalwood trade route.

My Son was considered as the sanctuary of the whole Champa Kingdom and was home to the Dua Clan. Ruling over the north of the kingdom they worshipped the God Srisana Bhadresvara.

However, My Son wasn't the only sacred city within the Kingdom. A second city, Po Nagar was home to the Southern Cau Clan and dedicated to the Goddess Po Nagar.

The downfall of My Son

After previously sacking Angkor, the Chams were to be defeated by the Khmer Empire in the 12th century. Subsequently, with the Vietnamese people’s southern territorial expansion, the Champa Kingdom was to recede even further.

In 1471, following the Cham-Vietnamese War, many Chams fled into Cambodia, reducing the Kingdom to a small enclave close to Nha Trang. Today, the Chams are a small, marginalized ethnic minority group in Vietnam.

My discovery of My Son happened by way of two flat tyres on a crappy motorbike rental via Da Nang. When I finally arrived it appeared to be a blissfully remote location. However, it is only about an hour from the popular coastal city of Hoi An so it can see crowds of day-trippers.

The sanctuary itself is set in the lush jungle surrounds of Hon Quap mountain and the Thu Bon River and is especially charming in the cooler and quieter times early in the morning or late afternoon.

China Beach (My Khe) and the nearby Marble Mountains are certainly worth checking it while you're in this neck of the woods. Both of these are close to Da Nang, roughly 50km away.

If you're looking for a laid back budget place to stay seek out Mr Hoa's place just off China Beach. The spring rolls here stuff of legend and Mr Hoa himself is quite the character.

Boring factual stuff about My Son

Fancying a wee mooch around the ruins of My Son?