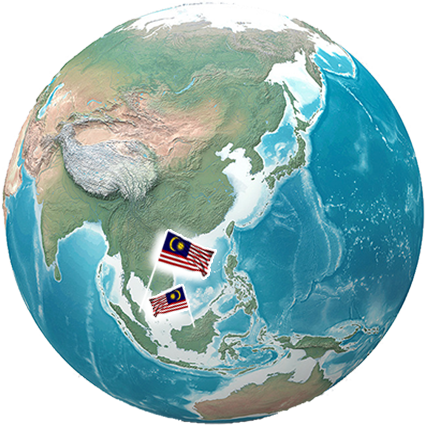 One of the most vibrant economies in Southeast Asia, Malaysia is currently bearing the fruit of decades of industrial growth and political stability. Incorporating two separate regions divided by 1000km of the South China Sea, Malaysia is a multi-ethnic, multi-religious federation of thirteen states and three federal territories.

The politically dominant ethnic Malay make up the majority of the population, but it's the ethnic Chinese minority holding the economic power. These communities coexist in relative harmony, although racial and religious divides persist.

Malaysia is benefiting from a growth in manufacturing and tourism is flourishing. There are fears however that development could harm the environment, particularly the rainforests of northern Borneo. These ancient ecosystems are under extreme pressure from palm oil plantations and illegal logging.

A brief history of Malaysia

The first migrations into the Malaysian peninsula would take place around 2500 and 1500 BCE. Inhabitants of the coastal regions would have had early contact with Chinese and Indian traders. Subsequent interactions with the latter would introduce Hinduism to the region, blending with the local animist beliefs.

Islam arrived on the peninsula around the 12th century when the Muslims would conquer India. It took hold, spread and then flourished from the 15th century when the Hindu ruler of the powerful city-state of Malacca, Parameswara Dewa Shah, converted to Islam.

In the 1800s the British and Dutch would take an interest in the region. Subsequently, the British East India Company established a trading settlement in Singapore. Soaring trade on the island would see the local population grow from around 5,000 in 1820 to nearly 100,000 in just 50 years.

Britain formally established protectorates in Malaysia in the 1880s. The mass production of automobiles around this time brought with it a high demand for rubber. Consequently, trees introduced from Brazil and labourers imported from India would work the rubber plantations to harvest this valuable commodity.

The Independence of Malaysia

Following the Japanese occupation of Malaysia in WWII, the British established the semi-autonomous Federation of Malaya in 1948. Subsequently, Communist guerrillas would take to the jungles and begin a war of national liberation against the British. To quell the insurgency the British declared a state of emergency, continuing until 1960.

The independent state of Malaysia came into being on Sept 16th, 1963, as a federation of Malaya, Singapore, Sabah (North Borneo), and Sarawak. Almost two years later Singapore would leave the federation and gain its independence too.

At least 200 Filipino citizens launched a surprise invasion of northeastern Borneo in February 2013. In the ongoing conflict, the Malaysian government has been forced to take the worsening situation seriously, launching offensives including fighter jet air support.

Led by Jamalul Kiram III, the Royal Army of Sulu claim they are the descendants of the Sultanate of Sulu. A Muslim state in the southern Philippines, the Sultanate of Sulu ruled parts of northern Borneo for centuries. Their claim is based on a token rent which Malaysia pays the royal house of Sulu for the use of Sabah.

The majority of visitors to Malaysia will arrive in the capital city, Kuala Lumpur. Referred to as 'KL', this is the country's flight hub and a worthwhile spot to fritter away a few days. Aimlessly wandering around China Town and Little India in the vibrant Brickfields are vibrant places for some prime photos ops. Out this way too are the iconic Petronas towers which up until 2004 was the tallest building on Earth.

My first encounter with Malaysia had me entering overland from Thailand in the north. There are two worthy pull-in points up this way. Firstly, Langkawi is almost directly west of the border and is described by many as one of the most beautiful islands in the world. Then Penang is about 100km south of Langkawi. Renowned for it's authentic (Chinese influenced) Asian atmosphere, this place serves up some serious tucker.

Onto the idyllic islands of the Perenthian and Tioman on the east coast, in the South China Sea. Although separated by around 500km both offer the promise of some serious lounging in paradise.

For a welcome respite from the humidity, the Cameron Highlands has some great hiking opportunities. Ipoh will be your jumping-off point to access this region. Famed for its tea plantations, further details on the highlands can be found here.

If the Jungle floats your boat, the Taman Negara National Park in the heart of the peninsula is home to the oldest primary rainforest on Earth. For further adventures into pristine Jungle, Borneo awaits your arrival, but don't wait too long, it's rainforest is shrinking at an alarming rate.

Thinking about heading into Malaysia and slurping a trough full of Laksa?