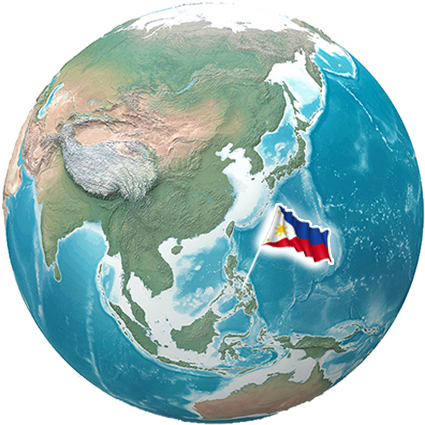 In the centre of the Philippines cast adrift in the Pacific Ocean, is the Visayan archipelago. Consisting of several hundred islands clustered around seven considerably larger ones of Bohol, Cebu, Leyte, Masbate, Negros, Panay, and Samar.

Primarily surrounding the Visayan Sea, high mountains characterize most of the Islands. As part of the pacific ring of fire, the region is prone to earthquakes and volcanic eruptions. It is often buffeted by typhoons and other powerful and unpredictable weather patterns.

Along with the rest of the country, a 300-year Spanish rule saw the region convert to Christianity and adopt the western culture.  Subsequently and after a protracted rebellion against rule from Madrid, the USA would take over this island nation early in the 20th century.

Self-rule in 1935 was followed by full independence in 1946 under a US-style constitution. Meanwhile, Spanish and US influences remain strong, particularly regarding language, religion and government. The US is a close ally and continues to provide military aid to help combat Muslim and communist insurgencies.

To this day the Moro separatist movement continues its 400-year resistance against foreign rule. The armed struggle against the Japanese, Spanish, Americans and Christian Filipinos is considered by current Moro Muslim leaders to be part of a four-century-long 'national liberation movement' of the Bangsamoro. (Moro Nation)

International flights touch down in Cebu. The oldest and second biggest city in the country isn't without its charms but discovering them is becoming ever more difficult. Beyond the dust and chaos, an effective if not chaotic ferry/bus network connects the far and wide parts of this tropical island group.

Roughly a hundred kilometres south of Cebu City is the small but growing diving hotspot of MoalBoal. Not far beyond here are the sublime Kawasan Falls, both increasingly popular destinations. Heading further south is a chance to encounter a Whale shark. This gentle giant can often be found mooching around the waters of Oslob.

500 kilometres and two big islands away is Borocay, undoubtedly the poster boy of the Visayas if not the Philippines. World-renowned for its long white-sand beach and offshore coral reefs. Further sand and sea frolicking can be had in Panglao, Bohol at Alona beach. This increasingly popular spot will also put the strange-looking Chocolate Hills on your radar.

Further afield in the far western reaches of the archipelago is Palawan, the Philippines so-called final frontier.

Completely Useless Facts about the Visayas

Thinking about a wee mooch around The Philippines?