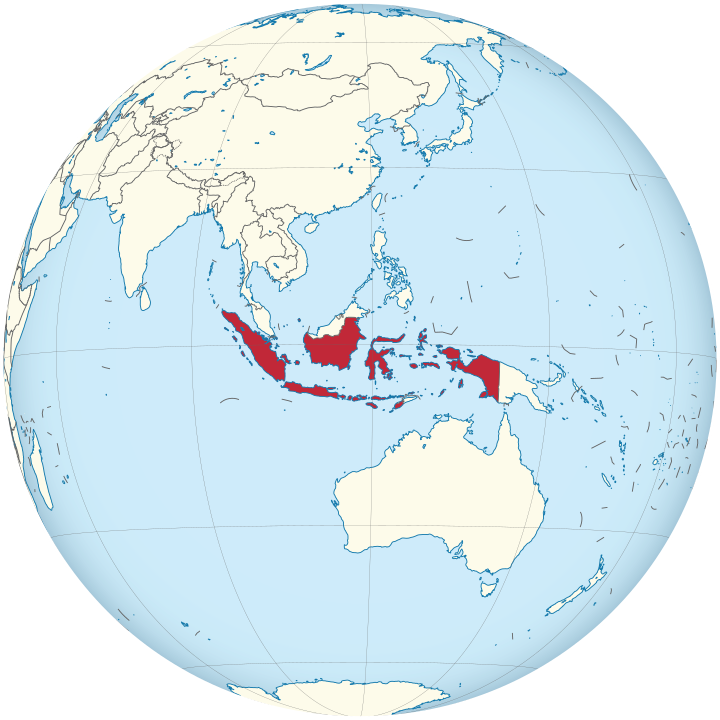 The worlds largest archipelago encompassing more than 17,000 thousand islands, Indonesia is Southeast Asia's largest economy and most populous nation. An ethnically diverse land inhabited by a whole spectrum of people from rural hunter-gatherers to the modern urban elite. There are more than 300 local languages in everyday use here and the world's largest Muslim population call Indonesia home.

Straddling the equator, it's largest islands are Sumatra, Kalimantan (A big chunk of Borneo) and West Papua. It's part of the ring of fire and volcanoes dominate the land, with over a hundred currently active. Consequently, Indonesia has had more than it's share of natural disasters, feeling the full force of a magnitude 9.0 earthquake in 2006 among others. With an epicentre just off the west coast of Sumatra, the quake caused a colossal tsunami in the Indian Ocean, devastating 12 Asian countries. Consequently, at least 225,000 people died in the disaster, and millions were left homeless.

A brief history of Indonesia

At the heart of the country lies Java, the worlds most populous island and home to more than half the country's population. (141 million) Dominating the country both politically and economically, it's here where much of the documented part of Indonesian history took place. Sophisticated kingdoms existed here long before the arrival of the Dutch in the 16th century. Java was the centre for powerful Hindu-Buddhist empires, the Islamic sultanates, and the core of the colonial Dutch East Indies.

Consolidating their hold for over two centuries the Dutch would eventually unite the archipelago around 1900. Many centuries earlier, the islands came under the influence of Hindu priests and traders in the first and second centuries A.D. By the 15th-century Muslim invasions which began in the 13th century saw most of the archipelago converted to Islam.

The deforestation of Indonesia

Native rainforest in Indonesia and Malaysia is being cleared en masse for the development of palm oil plantations. The oil extracted from the fruit of the palm is the key ingredient in a wide range of products including foodstuff, confectionery, cosmetics, shampoo, toothpaste and cleaning agents to name just a few. Palm oil production is causing this major deforestation, with Indonesia being the worlds largest producer of this devastating cash crop.

Consequently, this large-scale destruction is pushing many of the native species to extinction. It's destroying the habitat of already endangered species like the Orangutan, pygmy elephant and Sumatran rhino. Findings show that if nothing changes, the Orangutan will be extinct in the wild by 2026, and Sumatran tigers even earlier.

This forest loss coupled with conversion of carbon-rich peat soils is throwing millions of tonnes of greenhouse gases into the atmosphere, contributing to climate change.

It's a pretty big country but at the same time a rewarding and affordable one. High up on the tourist trail is Gunung Bromo in Eastern Java. This spectacular volcanic landscape is the stuff of fairy tales.

Relatively close by is the UNESCO World Heritage Site of Borobudur. This ancient temple set in jungle-clad surrounds appears otherworldly as the rising sun throws light onto the intricacies of the Buddhist stone carvings. On the same island, you'll find the capital Jakarta, Southeast Asia's largest city. 28 million people cram into this megapolitan melting pot.

The popular beach resorts of Bali are also part of Indonesia and it's the first island in a chain known as Nusa Tenggara. An island group also incorporating Lombok and Komodo, home of the Komodo dragon.

Further off the well-beaten track is Sumatra, Indonesia's largest island. The colossal volcanic crater Lake Toba set amid tranquil mountain scenery dominates the northern region. On the opposite end of the Island, just off the Kalianda coast, lies Krakatoa, one of the countries most volatile volcanoes, prone to powerful flare-ups. The most violent occurred in August 1883 and is still the most powerful explosion in recorded history.

Add to the above the coral reefs of Sulawesi, the Virgin rainforests of Kalimantan and the richest marine biodiversity on the planet in West Papua.

All in all, there's enough in Indonesia to keep you busier than a one-armed paper hanger with winnits.

Dunes of the Gobi

Fancy a wee mooch to the rim of a fire-breathing volcano? Or a more leisurely stroll through a village inside one long extinct?