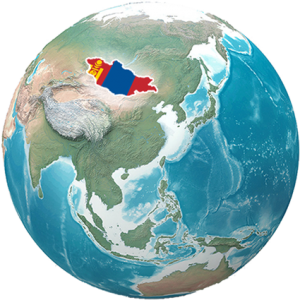 Landlocked and dominated by a sparsely populated steppe and semi-desert lies a land of vast emptiness. Almost twice the size of Eastern Europe and home to a population of only 3 Million inhabitants, Mongolia has the lowest population density of any country on Earth.

Mongolia is largely a plateau, with an average elevation of about 1,580 metres above sea level. Alongside its predominantly arid landscape, the west and north of the country host forested high mountain ranges and lake-dotted basins. The highest peaks are in the Altai Mountains in the southwest.

Vast quantities of untapped mineral wealth have made Mongolia a target for foreign investors. Thus, transforming the country's tiny but fast-growing economy and threatening a traditional way of life. This rapid change has taken place against a backdrop of political wrangling and government pledges to tighten control over the country's assets.

In the 13th century, a small tribe began a conquest that would eventually become the largest contiguous land empire in history. Led by Chinggis (Ghengis) Khan, the territory of the Mongol empire would reach as far west as the Black Sea in Europe, to the Sea of Japan in the Far East.

Following the death of Ghengis in 1227, bloody, family disputes over leadership and direction ensued. Subsequently, Kublai Khan, the grandson of Ghengis would take control and proceed to lead the Mongols onto further conquest. Kublai would form the Yuan Dynasty, which went on to rule China for almost a century.

By the time of Kublai's death in 1294, the Mongol Empire was divided into several powerful states. However, in the 14th century, these states began disintegrating, culminating with the Mongols eventual retreat back to their original steppe homelands.

Late in the 17th century, the country came under the rule of the Chinese Manchu dynasty. It was then divided into Inner and Outer Mongolia, resulting in present-day Mongolia (Outer) representing only a part of the Mongols’ historical homeland. Today, Inner Mongolia continues to remain under Chinese rule. Consequently, more ethnic Mongolians currently live in the Inner Mongolia Autonomous Region in the People’s Republic of China than in Mongolia itself.

During the first decade of the 20th-century Chinese actions aimed at further integration of Outer Mongolia raised concerns with the Mongolian aristocracy. Upset by the prospect of the colonization akin to the developments in Inner Mongolia during the 19th-century, they turned to the Russian Empire for support.

Subsequently, in 1921, with the aid of Soviet backing, Mongolia won its independence from China. The Mongolian People's Revolutionary Party was installed and maintained close links with the Soviet Union throughout its history.

Following reforms in the Soviet Union and mass demonstrations in Mongolia, 1990 brought an end to the 70-year-old Soviet-style one-party system. The first free, multiparty elections were held in Mongolia democracy was born.

From the Altai Mountains in the far west to the Kongoryn Sand Dunes in the southern Gobi Desert, this is a land of mesmeric landscapes.

A rapidly disappearing way of life, where the movements of nomadic settlements are determined by pastureland and hunting with eagles has been a tradition for thousands of years.

Unfolding before your shutter is an endless expanse of unexplored, pristine terrain.

Fancy a wee mooch around Mongolia?

I entered Mongolia from Russia at the Kyakhta/Altanbulag land crossing, about 230km south of Ulan Ude following a really, really long train ride through Siberia. It's a landlocked country bordered by both China and Russia. There are many border crossings, but not all of them are open to international travellers and the locations of these border posts can and do change.

Citizens of several countries including the US and Brazil can visit Mongolia for 90 days visa-free, whilst other nations such as Canada, Germany and Japan amongst others will be permitted a 30-day visa-free entry. Most other nationalities will need to pre-arrange a visa in advance of arrival.

For up to date information on visa requirements, you should check with the Embassy or Consulate of Mongolia before you travel.