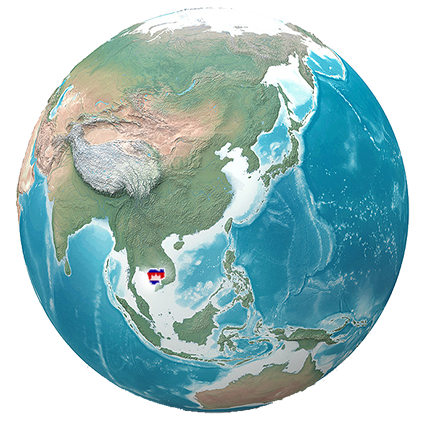 Having endured civil war for eight years, followed by the subsequent murderous rule of Pol Pot in the 1970s. Modern-day Cambodia is now benefiting from an extended period of relative stability. Painful memories endure, however. During the rule of the Khmer Rouge, the radical communist party were responsible for the deaths of a quarter of the population, killed in a brutal pursuit of a rural utopia.

Today, the Cambodian economy is dominated by garment-making, but tourism is expanding, and the country hopes to tap into offshore oil and gas reserves. It's drawing in overseas investment to replace aid, but corruption is deep-rooted. It is still one of the world's poorest countries with the majority of the nation's workforce still employed in subsistence farming.

It's a relatively small country snuggling up amongst it's larger South-East Asian neighbours. The famous temple site of Angkor Wat in the north-west of the country is most peoples only reason for heading to the country. Once inside its borders, however, be prepared to have the pants charmed off you as the Cambodians are a friendly bunch.

Angkor Wat is clearly a big draw for any shutterbug and opportunities will reveal themselves by the spadeful. For info regarding this ancient wonder see here.

Providing, you're not fully templed out after that lot you could venture further north on a wonderfully rough ride to the Thai border where you'll find Preah Vihear.

Onto the bustling capital that is Pnom Penh. This place may appear a little chaotic, however, it's a walkable and charming little city. Photogenic spots include its amiable riverside and the ornate Royal Palace.

Between the capital and Siem Reap, Kampong Cham is a bustling junction with a languid riverside, and a lovely spot to spend a little time. The fantastic bamboo bridge and its Mekong shoreline can reveal some unexpected lens fodder.

Ratanakiri province in the north-east of the country is instantly recognisable by its scorched red earth. It's wonderfully rural and crowds certainly won't be a problem.

Moving south and along the coast, the popular beach town of Sihanoukville (formerly Kampong Som) and the alluring colonial coastal towns of Kampot and Kep are definitely worthwhile beachy type excursions.

Dunes of the Gobi

Fancy a wee mooch around Cambodia?

My introduction came via a southern Vietnamese border, crossing in a longboat up the Mekong River, part of an overland journey from the UK to Indonesia. Subsequent forays into Cambodia had me entering from Thailand to the west of Cambodia.

In total, three countries border Cambodia; Thailand, Laos, and Vietnam. There are numerous land border crossings on the edges of these countries, and the location of such crossings can and do change. A tourist visa can be purchased in advance or on arrival at these land crossings.

That said, most people will be boarding a plane to experience the delights of Cambodia, or at least to arrive in the general area of Southeast Asia. Visa's can be obtained beforehand at a Cambodian consulate or travel agent. They can also be purchased on arrival at the airport.