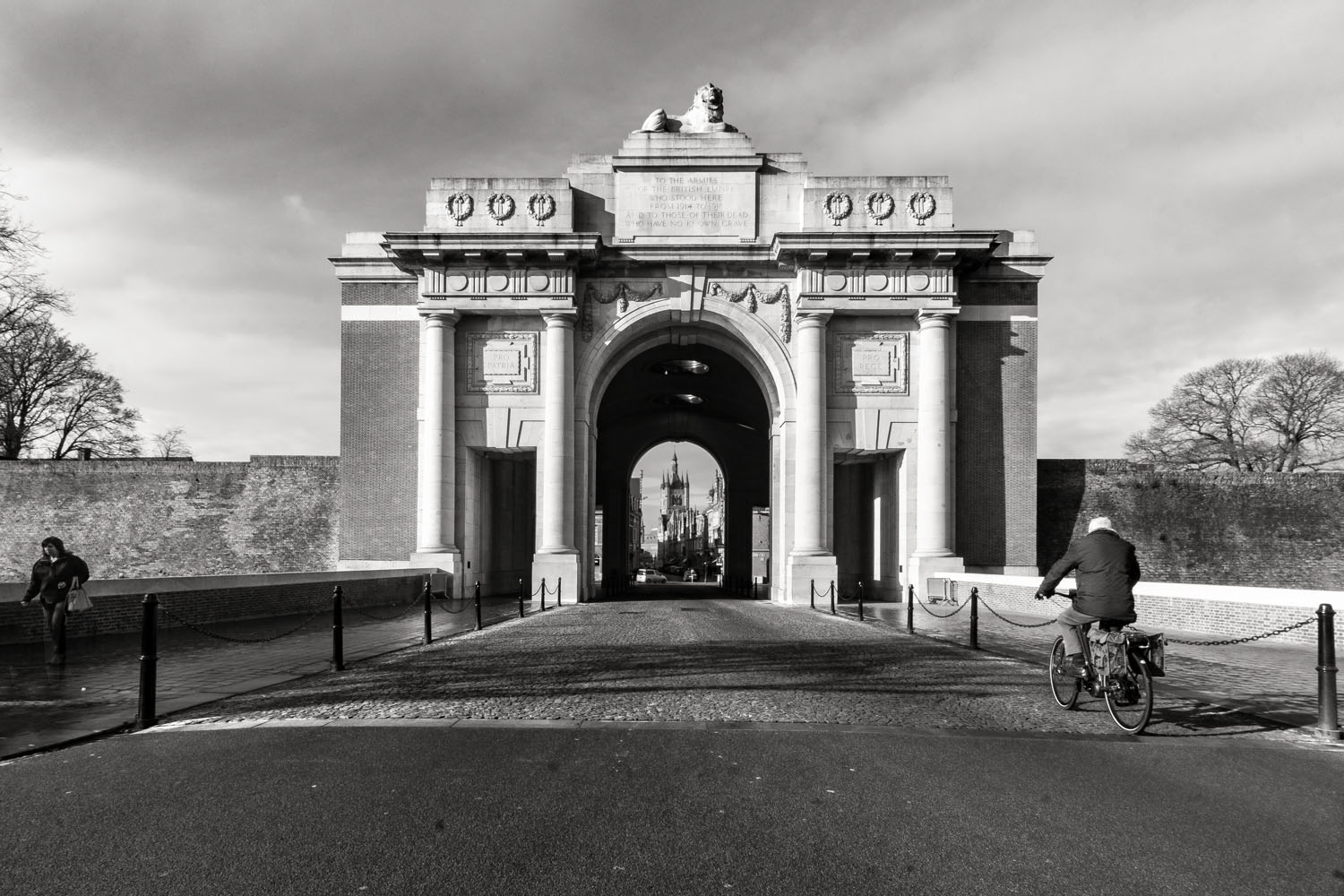 Who will remember, passing through this Gate,
The unheroic Dead who fed the guns?
Who shall absolve the foulness of their fate, —
Those doomed, conscripted, unvictorious ones?
Crudely renewed, the Salient holds its own.
Paid are its dim defenders by this pomp;
Paid, with a pile of peace-complacent stone,
The armies who endured that sullen swamp.

Winding their way through the Grote Markt, they made their way toward the newly built Menin Gate Memorial to take their places on the eastern side of the gate. Flagpoles on the rebuilt buildings around the famous square were hung with black flags.

Following these relatives of the dead, leaving from the Town Hall were the official dignitaries Albert, the King of Belgium, Field Marshal Lord Plumer and General Foch. Veterans of the Great War, relatives of the fallen British and Commonwealth troops alongside hundreds of local residents were gathered in the Grote Markt and along the route to the Menin Gate.

People leaned out of every open window of the newly built houses overlooking the memorial. Press photographers stood on walls or ladders to get a good vantage point. Loudspeakers were set up to enable everyone to hear the ceremony and millions tuned in to the wireless over in Britain.

The inauguration of the Menin Gate

Lord Plumer made his way to the podium and faced the Ypres salient:

“... One of the most tragic features of the Great War was the number of casualties reported as 'Missing, believed killed'. To their relatives, there must have been added to their grief a tinge of bitterness and a feeling that everything possible had not been done to recover their loved ones' bodies and give them reverent burial. That feeling no longer exists; it ceased to exist when the conditions under which the fighting was being carried out were realized.

But when peace came and the last ray of hope had been extinguished, the void seemed deeper and the outlook more forlorn for those who had no grave to visit, no place where they could lay tokens of loving remembrance...

It was resolved that here at Ypres, where so many of the 'Missing' are known to have fallen, there should be erected a memorial worthy of them which should give expression to the nation's gratitude for their sacrifice and its sympathy with those who mourned them. A memorial has been erected which, in its simple grandeur, fulfils this object, and now it can be said of each one in whose honour we are assembled here today: ‘He is not missing; he is here’.”

After the speech, buglers of the Somerset light infantry paid tribute by sounding the 'Last Post' and pipers of the Scots Guards, standing on the ramparts, played a lament.

This simple ceremony is performed by buglers from the Ypres fire brigade and the only time it hasn't was during the German occupation of Belgium in the second world war. The buglers returned the same night that the Germans left.

From October 1914 to October 1918, five major offensives occurred at Ypres (known also by its Dutch name 'Ieper'). Consequently, by the time the last shells fell in October 1918, almost 200,000 Commonwealth servicemen had been killed. A more detailed account of the events at Ypres can be found here.

Thinking about paying your respects at the Menin Gate?